The Littlestown Area Municipal Band, founded in 1986, is celebrating its 25th year of performances.

Ben Messinger, 45, a graduate, was the founder of the group, and serves as the band’s conductor.

Messinger said the band was established  when “I was involved in the Littlestown Jaycees (in 1986) and we were planning our annual Good Old Days parade and (discovered) the high school band wasn’t available to be in it.”

In lieu of not being able to feature the high school band in the parade, Messinger scrambled to create one of his own.

“I played in a lot of bands back then,” he stated, so he began to contact members of various bands he had come to know.

“I said, ‘Hey, you want to come march in this parade?  We’re not going to wear uniforms’,” Messinger told perspective members.

He said that offer attracted “a lot of people,” because most had a disdain for wearing heavy wool band uniforms “because they were so hot.”

“I told them come as you are,” he said. “We can march and be conformable.”

Of those attending the parade, 18 formed the nucleus of a new band that initially did not go by the name Littlestown Area Municipal Band, which it would later assume.

“We called the group the Band of Misfits,” Messinger stated.  “That was the name at first.”

“We did parades for about the first two or three years, then we started doing concerts in 1988,” he said.

The group did finally adopt a uniform, and changed its name.

“We started going with the black and white attire (around 1990), then  we changed the name (from the Band of Misfits) to the Littlestown Area Municipal Band in 1993,” the band founder said.

Now the band consists of about 75 members, although they all don’t usually turn out for performances at the same time.

The average turnout, Messinger said is 45 to 50 members.

Members not only come from the Littlestown community, but also as far away as Frederick and Baltimore.

To date, the youngest member to join the group  was 12 and played the french horn, while the oldest (who recently passed away) was 97, and played bass clarinet.

“We don’t do parades anymore. Nobody liked to march.  Some just couldn’t march,” he said.

Among the regular concerts at which the groups performs are the fall and spring formal concerts at ’s , , Littlestown, as well as a Christmas concert at the church.

The group also performs at summertime church picnics and various festivals, as well as a concert at Littlestown’s .

The band members perform as volunteers.  “Everybody does it for free,” Messinger stated.

As far as financing the group’s needs, “We accept donations, but we don’t charge,” he stated. Any money acquired is invested in instruments or whatever the group might need.

The next scheduled performance of the Littlestown Area Municipal Band will be the band’s 25th Anniversary Concert to be held , April 17 at ’s .

A book recounting the band’s history will also be available.

Messinger said, “It’s been incredible how things have developed for the group since its founding.”

For additional information regarding the group, donations, or upcoming concerts, Messinger may be contacted at 359-4556.

The group also has a web site at littlestownareamunicipalband.com. 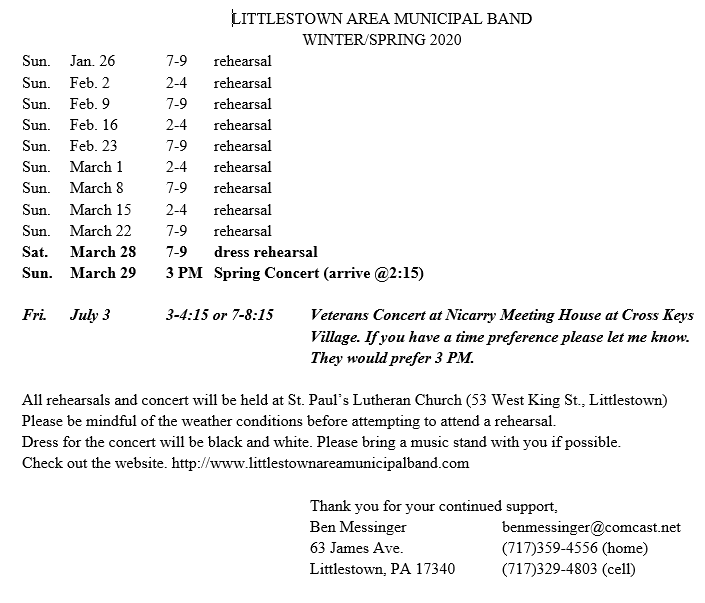